Jamie Foy didn’t get SOTY without a reason. Without any doubt he is one of the most talented guys who ever stepped on a skateboard. First try handrail bangers every day are just one proof. We met him at the Red Bull Rollercoaster in Munich for a quick chat. 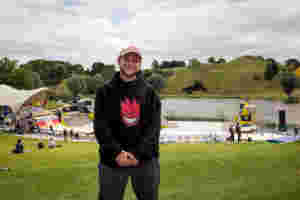 Is it your first time in Munich?

I read that you are not too much into eating salad. So, you must like the food here?

With the way I eat it gets hard sometimes when you travel to get what you want. I just make sure to go to places where they put it together in front of you. Then I can tell them I don’t want this, and I don’t want that. But I haven’t tried Bavarian food yet. I am just super plain. I love pasta and pizza.

Is that your secret to have that much power?

I don’t know. It works for me but hopefully one day I will start eating more vegetables. Because I know I need all those nutritians and everything. Right now, I don’t really like it, so I stay away from it. I am doing good, so it is working.

You are so confident on your board. It seems like you can skate everything. Is there a secret behind it?

I guess if you would say there was a secret then it is to skate every day. That is what I do.  I wake up and it is not like: “Am I gonna skate today?”, it is: “Where I’m gonna skate today?” Even if I am a little bit hurt and try to do other stuff like cleaning the house, I almost end up by the end of the day skating somewhere. It is just too easy. My board is always with me, all my homies are skating. If one homie is not skating another homie is skating. The more you skate the more confidence you build. It is just becoming second nature. Grinding down a rail is kinda like walking down the stairs. If it is good pop and a good landing, just a good rail, for me doing a regular front 50 it is no problem.

"Grinding down a rail is kinda like walking down the stairs"

Like I said, I am always skating, so you always gonna be learning new tricks. And sometimes it is just some fun tricks you wanna do not even just a super hard trick. A 50-50 pop shove-it it is not the hardest thing. Once you do it it is pretty easy. It is like putting some spices in your food. You wanna keep the taste but you wanna change it a little bit.

But I’ve never seen it on handrails.

I learn them on flatbars a lot and try to take it to a handrail and make it look good.

I guess your progression on rails will never be over. What kind of tricks do you see yourself doing on rails in 10 years from now?

I think the stair count will go up. I have homies that grind 40-rails. I think my highest right now is a 34. So yeah it goes up. It is like people with drug addictions, they always want more. It is the same with skating. It is always like someone has done this, but I wanna do something better and bigger. It is a never-ending feeling that you want more and want to do new stuff and be the best you can be. So, I feel like that is how skating is gonna be, it is the way the guys are now like me and all the dudes in the contests right now and out in the streets and parks. From ten years ago the progression that we have been in is way gnarlier then twenty years ago. But from where we are at right now to ten or fifteen years in the future, it is gonna be the same thing. The progression keeps happening. Because kids are seeing what we are doing and that is becoming the normal and kids wanna be doing abnormal stuff, so it is just gonna be crazier. I think flicking into rails and being good at transition, street and transition is gonna be stable in skating now. More years go by and with the Olympics people are gonna be more diverse in skating. 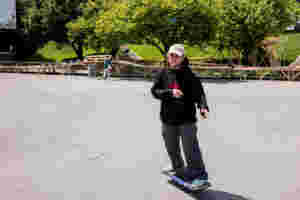 If you think about 100 meter sprint, there will be a limit some day where you can’t go faster. Do you see it the same with skating?

That is a physical thing. Your legs can only move so fast but with skating you gotta think of it and you make it happen. One little pressure over her and your board will make you do a completely different thing. So It is like  figuring out those little tricks like the physics behind it and once you figured that stuff out it is kind of no stopping. For example Ishod, he is so analytical and precise in his head about everything that he can do anything he wants. He is so smart with how his board works. And that is the thing with skating. Back in the days it used to be party, party, party, skate and it is becoming skate, skate, skate, party, skate. It is just always skate now and that is why I think skating is gonna get way crazier than a long time ago. I would talk to Andrew Reynolds and all the pros they’re like: „You skate so much. Back in the days we would think you are a nerd, you skate way too much like that is all you care about.” But now that is like how it is. The world moves so fast with all the internet and that stuff. Skating has become so fast, you have to go skate every day to stay up in it and be relevant. But that is the thing, kids wanna skate all the time. There is parks everywhere, it has become more accepted among regular people. They see skateboarding more like a sport. So, it is cool to see that progression. When I was young, skating was a little bit more street. And now it is like an in between.

Did things change when you became SOTY?

Kids are like, hey SOTY. They seem very excited. I got very excited when they gave me the award. It was unbelievable. A surreal feeling to have that award under your belt. Because I still feel like the kid in Florida three years ago, skating with my homies and trying to get sponsors. It is kind of overwhelming but at the same time I love it, all the love that kids give me for what I do. It makes me happy. A feeling that what I do really means something. I do it for me but also the response from the kids makes me so happy.

Can it also be a pressure?

I think it could be, but the way I am, the way it worked out – I wasn’t trying to get SOTY. I was just skating. So, it feels like, I got the award for doing me. So this is in my head, I can do what I wanna do and things will work out. So far it seems like everything that I have been doing and everything that is in front of me is good and it is right and going well for my whole life, just skate all the time with my friends, try to film a lot, do some contests and practice for those, try to keep it overall. I don’t try to put a lot of pressure on me because I don’t wanna get all upset. I try to stay happy. If I get serious on the board, I probably would put it away. If I am mad at my board I shouldn’t be doing this. I guess the reason why I am here is because I love it. So, I wanna make sure I stick to those roots.

You are originally from Deerfield. XXXTentacion got shot there just recently. Did you know him?

I did not know him, but I know that he got shot in front of my friends dads building. It is this place called Riva Motorsports, that is where a lot of people go to buy motorcycles and four-wheelers and my friends dad owns that whole building and that business. My friend knows people who saw it happen. From the skatepark that I grew up you could throw a rock to where this guy got shot. That is the thing in Florida, you have a lot of good places but then it gets kind of hood and a little bit sketchy. It is just crazy when I heard that it is close to home. It is crazy because he is super young, I don’t really listen to his music, but I know that he was touching a lot of kids with his music and he was only 20 years old and no one should die that young. Especially not when someone took his life. 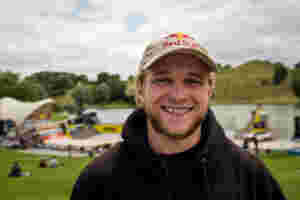 Willow's progression over the last few years has been insane to watch, read more about the "sequel" in his Issue 48 interview!