The Polar team took a fairly extensive voyage this summer. Paris, Stuttgart, and Cologne were on their list and hence it was the first time the team visited Germany. And you can really consider the team as such. It is a close-knit crew with strong solidarity and the quality of reviving the spirit of skateboarding in very special ways.

“This isn’t skateboarding, sergeant. This is carrying skateboard,” Kyle boldly explains to the goofy guy in uniform, just to yell, “This is skateboarding!” when the cop is leaving. And he proceeds immediately to haul ass through the nocturnal city with the boys, flying over all of the obstacles that get in their way with ease, always moving, sidestepping, equal to a flock of birds. The boys are in this case the members of the Bones Brigade, who participated in Police Academy 4, where the described scene was taken from. Admittedly, this is not something you can call a core skate video, but still, this weak piece of mainstream cinema slapstick comedy makes up my first contact with skateboarding. This and a comparable un-core all expense family holiday in Italy, where I witnessed a similar situation. A crew of 20 skaters was hauling ass, doing ollies and wallies on the broad strolling promenade that I was dully walking along holding my parents’ hands. In my young mind, I was fascinated by what was going on. Watching this kind of skateboarding in reality, casted an even bigger spell on me. What I had seen was no tagging along in prescribed lanes nor was it getting lined up in rows of two. It was pure freedom. It was exactly what I wanted, which was why there was the desperate need to buy my first board during that mentioned vacation.

Countless years later, I’ve already experienced a lot of things with this wooden toy, but being in a large group of the kind I saw back then, pushing through the city, naturally skating over the main roads, and running over every red light is not that ordinary. Actually, it’s pretty rare, at least for me, but when it happens, it’s always an indescribable exhilaration. Better than most of the actual tricks themselves.

Yada yada yada, just tales of an old man. Fast forward to the present. June 2017, the Polar team just arrived in Stuttgart. On the way from the hotel to the restaurant, where we are going to get dinner, we already passed the spot at Pauline. The boys were already hooked and even after eating, their feet were still tingling. New city, new spots – the efforts of the previous days of the tour were already forgotten. The least thing to do was to go out and have a look at what’s going to be served the next day. And Stuttgart has a lot to offer. I have to admit at this point that I have always kind of neglected the city by the Neckar River and now I have to face the painful truth that I’ve missed out on a lot. The ground here is much smoother than the buttcheek of a Greek marble statue and equal to the Penrose stairs, it always seems to go downhill and you come across a spot better than the previous one every five minutes. 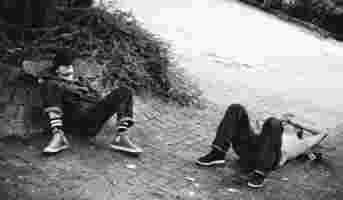 Sure, maybe you tend to feel this way when you explore new terrain and it naturally feels more exciting than the stale streets in your own neighborhood – but if you have any precocious thoughts like these running through your head while reading this, let me say that this is not about reality or reason. This is skateboarding. This is imagination and emotion. Which is subjective and huge. Or at least should be, or otherwise life comes across as dry as a prune, whereas it should be enjoyed much more like a juicy peach. Apropos food, we’ve just finished and got going again, keeping on cruising down the hill smoothly on divine ground. The days extend to the fullest before dark sets in around this time of the year and summer is still to reach its climax. After-school vibes are traveling through the air: nothing to do but party and your whole life in front of you. It’s one of those Caribbean nights that are so rare in Germany (especially this summer).

Every soft breeze is welcomed in the Stuttgart kettle. The streets are full of people, all having a good time and rosy cheeks from drinking Aperol Spritz. Sitting in front of pizzerias, wearing linen pants and summer dresses, toasting to each other at art show openings, having a laugh at the park, gazing at the mob of skaters, who bring in some variety, and we gaze back at them – just as happy. The new city, the spots, drifting through a warm summer night – aren’t those the moments that constitute existence? Unfortunately it is, just like there are countless, embarrassingly unsuccessful attempts of describing sex in literature, a hopeless endeavor to try to explain this experience in adequate words. It’s like trying to explain an LSD trip: the colors will never shine as bright as you actually experienced them. However, I’d rather fail than not even try. It’s more floating than rolling. An effortless travel. The ollies feel perfect and everyone jumps around as if someone threw a truck load of tennis balls onto the streets. Like a soda foaming over, the crew pours through the city, thousand pieces but still in unity. Sugar shockwaves rumbling in your brain. Flatrails appear and get slid on the way, wallies into downhill rides, powerslides, hippie jumps. More fun than in a Mentos commercial. Man, that would be some dope Insta stories content if we had the time for it. But everything’s flowing and has to go on. Everyone feels it.

If you had to remake Police Academy nowadays, the Polar team would make the perfect cast. Pontus Alv is strongly inspired by the crew vibe you see in old Powell videos, considers them prototypes for projects like Trocadéro Days or Manhattan Days, which embody exactly this kind of skating. That’s why he didn’t put clean-cut athletes on his team but rather individuals who have skateboarding in every little piece of their body. Real characters with all their strengths and obsessions. It actually kind of feels like you are with a bunch of dudes from some ‘80s high school movie. The dropouts, who do their own thing at prom and have the way better time, while the jocks celebrate themselves one last night. Whereas they are thrown into the hassle of everyday adulthood, we will fully exploit our childlike freedom for the rest of our lives. Even the passersby seem to realize that there is some special kind of crew crossing their way. They seem curious when we arrive at the Schlossplatz, where we end our tour. The wild ride is over now, but for me, a piece of Hollywood became reality. My personal realization of a Police Academy moment. I found Animal Chin. Next morning, there’s hangover mood in my head. I have to move on to Munich. Street League. Even a 10 Club trick couldn’t be better than this. 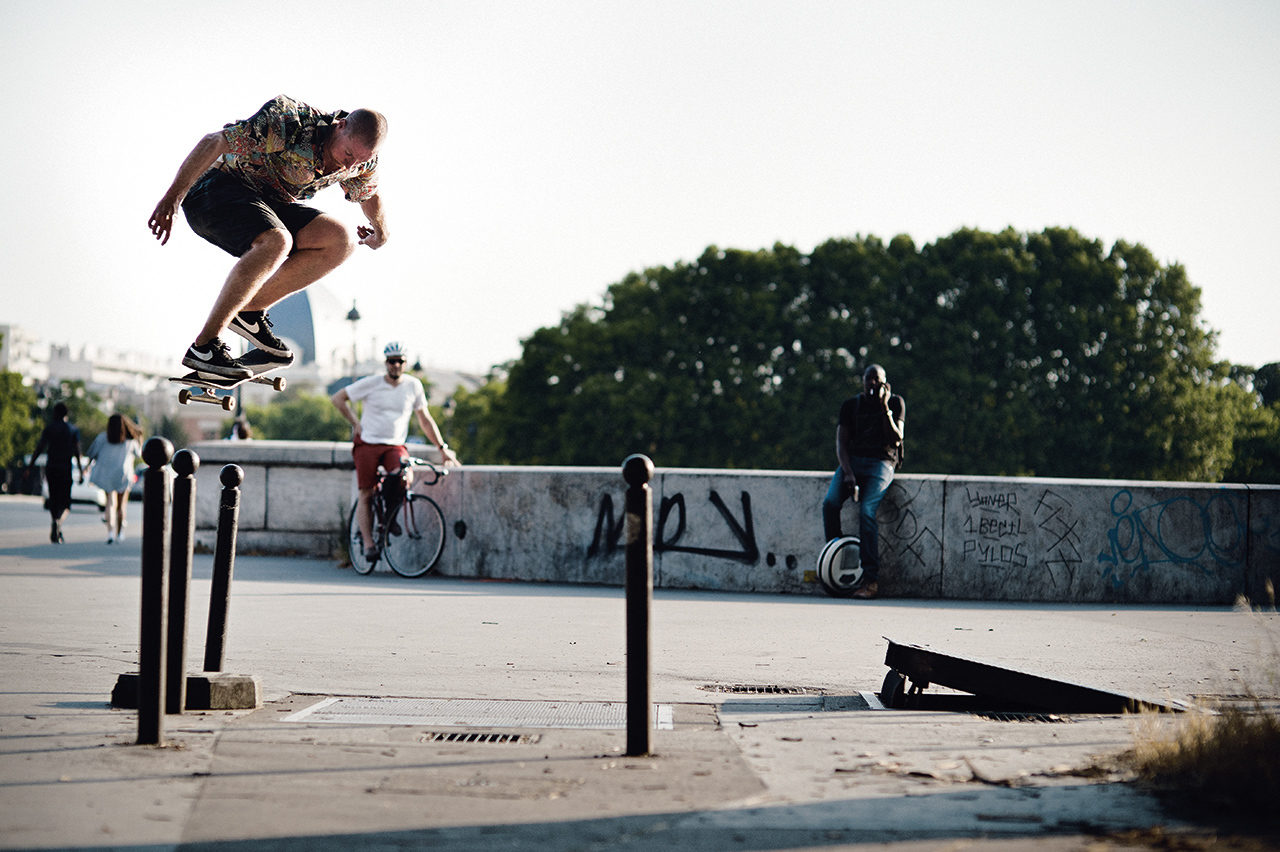 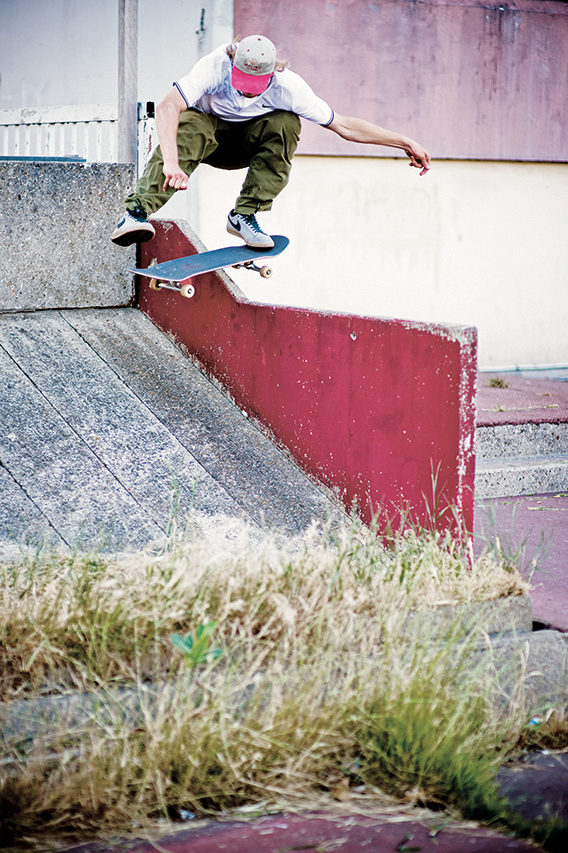 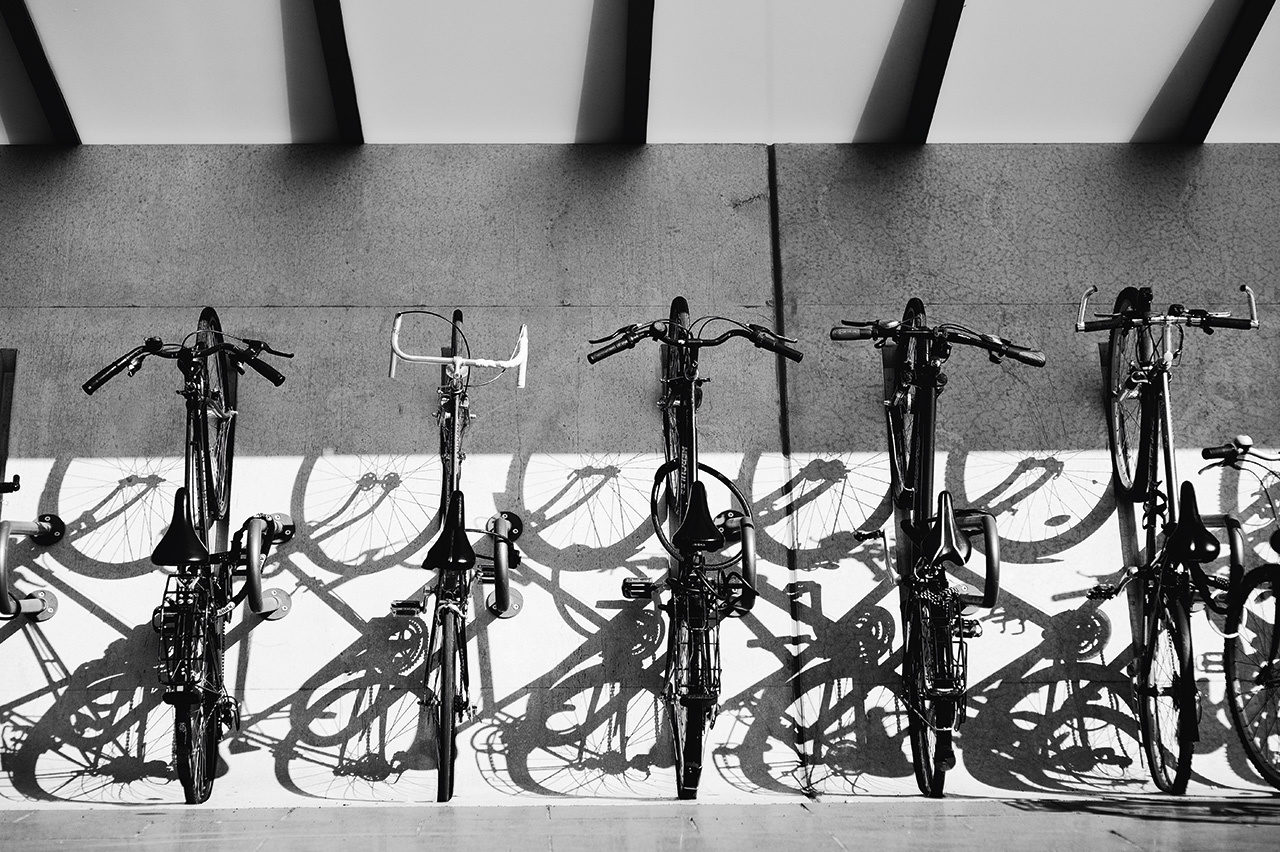 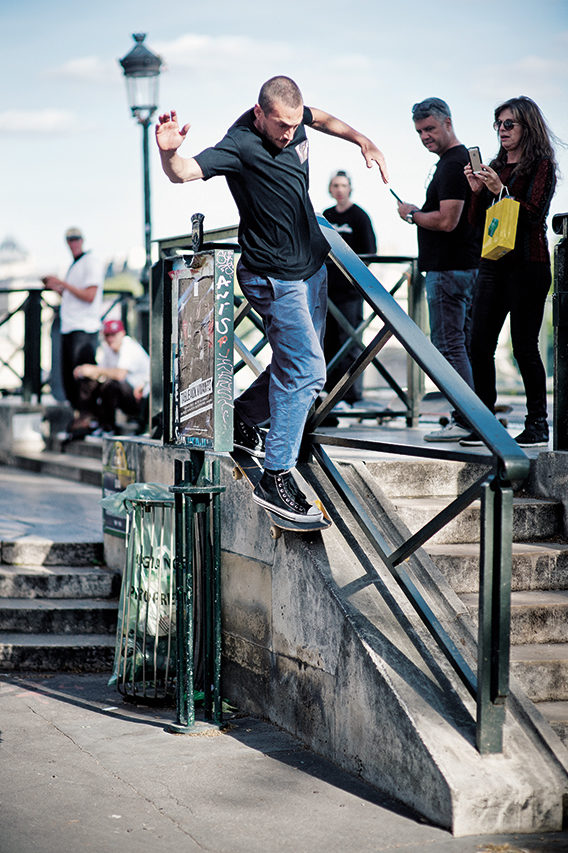 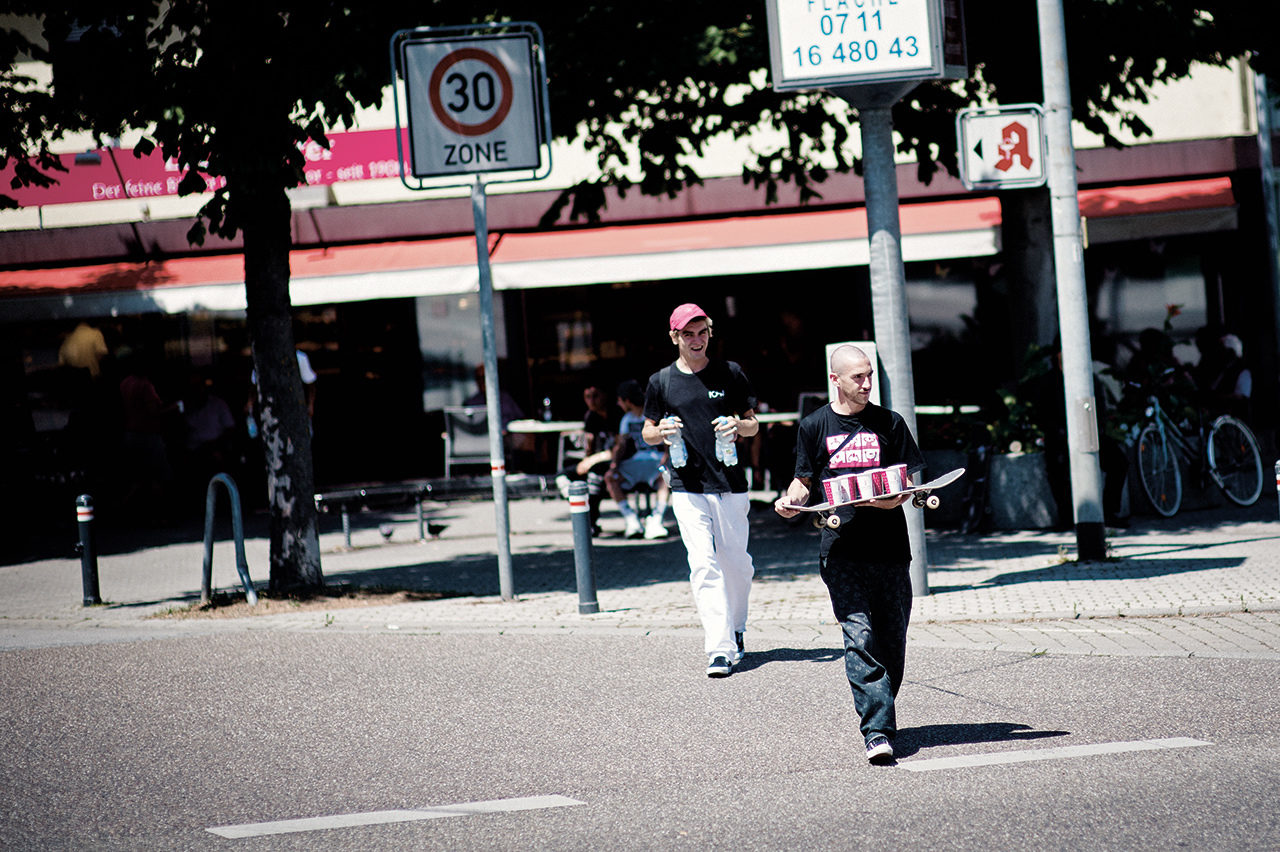 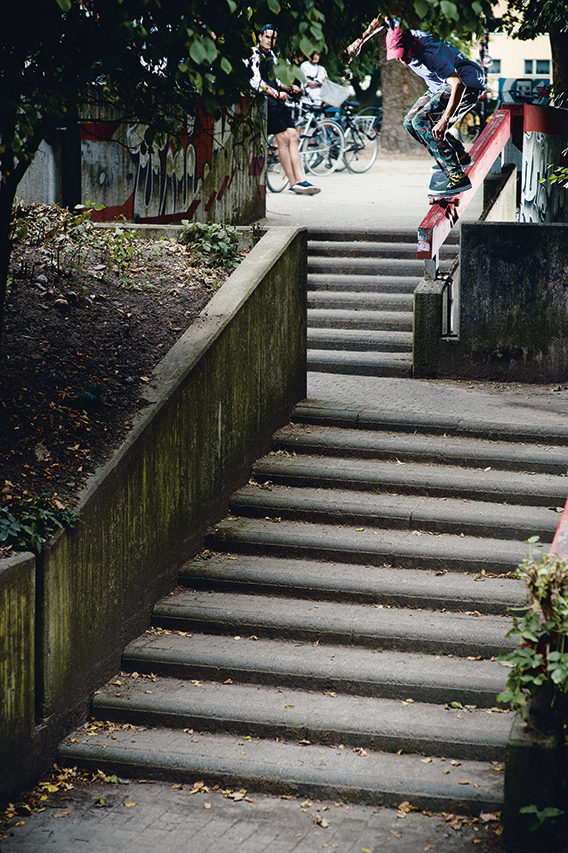 „If it doesn’t suit you, get a new suit“ und andere Lebensweisheiten von Mr. Stefan Janoski.

We talked to Stuart Maclure and Louis Woodhead from LLSB about how they succeeded with their campaign.