World Cup winner, Toy Machine founder, photographer, painter – Ed Templeton already did a few things in his life. After his serious knee injury he went a bit more mellow on the board but on Toy Machine tour this summer he was hanging in the streets again. We talked to him in Munich.

Last skate-trip you were on?

My last skatetrip was 2012, an Emerica tour for Go Skateboarding Day and then soon after that I broke my leg. So, I essentially retired at that point and I haven’t been on any skate-tours for six years. This tour is my first one in a long time. I forget how damaged your body gets. And I haven’t even barely been skating. It gives me a new appreciation for these guys. They’re on the road all the time. Their body is always fucked up in some way.

How come you went on this trip?

I had time. There have been a lot of trips that conflicted with something else I am doing. I have a lot of art show things that I am working on, then Toy Machine, and nothing has really come up over the last few years where it worked perfectly for me. And this one did, so there was no excuse I should not come.

You skated a bit on the tour. What was the last trick you did?

Yesterday in Innsbruck, we skated the Landhaus Platz, it’s amazing and I did a nosebluntslide on one of the transition quarterpipe things there.

What was the last picture you took?

This morning I took a picture. I took some photos with my iPhone on the walk to the spot. The last film photograph was one of CJ [Collins] hanging out in the room this morning. He is a funny little kid, he is only 14 and his life is so fucked already. In a good way.

What was the last trick you saw that blew your mind?

Yesterday I watched Collin do this gap over a doorway on to a glassbarrier to bluntslide. I can’t even explain it, but it was really dangerous. He could have got real fucked up if he’d missed in some way, but he didn’t. It was pretty incredible. This tour I am blown away all the time. People ask me sometimes, what is the best era of Toy Machine and it is truly right now. I mean you think of these greats from the past – Jamie Thomas, Brian Anderson, Donny Barley, whoever. These guys in this generation are a different level of talent. They grow up on the foundation that those guys built and they start with those tricks. It is not even a big deal for them. And so the talent level of this team apparently Axel [Cruysberghs], Collin, even our AMs, it really does blow away the talent of the teams past.

What is the last movie you watched?

I guess, if I was answering factually I watched a bunch of videos on the plane flight to London. It was a really good western but I can’t even remember names. But before we left we saw “The Isle of Dogs”, that was really cool. We saw the new Avengers movies. [laughs] Deanna is a big Avengers fan. 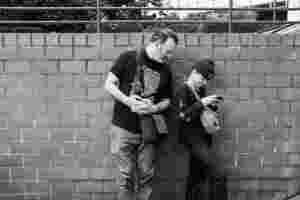 Last time you wore a tie?

Last year I had an exhibition in New York, Photography Exhibition and for the opening I wore a suit and tie. Dressed up for fun.

We went to see a gallery show in Berlin. Raymond Pettibon. But for museum, the last one we got to go in was the National Gallery in London.

The last thing that made you laugh?

Ah man. I laugh everyday with these guys on tour. Yeah, CJ took a dump out in the forest yesterday and he didn’t even try to hide himself. We got photos of the poop coming out of his butt.

Last reason you were angry about somebody?

I mean every day I am pissed about our stupid president in the US. I haven’t been angry with anybody on tour. Everyone has been so good and has been skating so hard. Even though it seems like they are just partying 24/7. If the spots are right, they just snap out.

"I feel like I’m partying all the time, but I just don’t really drink or anything"

When was the last time you partied?

I feel like I’m partying all the time, but I just don’t really drink or anything. I had a little swallow of the Captain Morgan yesterday. I guess that qualifies  as partying. But like a party party, we have friends over and make vegan food and stuff. But the party is pretty mellow, a suburban party.

What was the last meal you had?

I had breakfast this morning at the bio market, banana, soy yoghurt and some juice.

What was the last book you read?

I am that kind of person that has three or four books by the bedside and I kind of go back and fourth. But I didn’t even bring one on the trip. I have this book, it is a history book. Savage Continent: Europe in the Aftermath of World War II by Keith Lowe. And then I was reading this book of the Photographer Robert Adams, Why People Photograph: Selected Essays and Reviews.

What was the last album you bought?

The Last thing you have bought?

I bought a dinner last night for these fine gentlemen.

I haven’t bought anything for myself the whole trip except food. Oh okay yes, I did buy a small photobook in London, but I can’t remember the name. 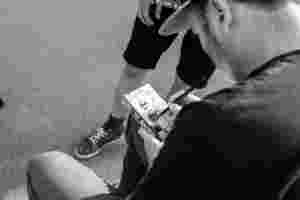 A present you got last Christmas?

Puhh. It is harder than you think, to remember all those stuff out of nowhere. Deanna do you remember what you got me?

Deanna: I guess I got you a book, but I don’t remember it either.

I said it yesterday trying to nosebluntslide this thing.

Last time you thought, this isn’t worth it?

I feel like that happens a lot. There has probably been some situations in the demo where I see something that I used to be able to do then I sort of entertain the idea of trying it and then ultimately realize this isn’t worth it. Just it would take too long and I don’t even wanna start the battle. I mean that idea that I tailslide this bank and I realize that my leg doesn’t work and I am afraid of it still so I don’t I have any confidence still and it feels like it is not gonna work so then your body makes you jump out of it and I haven’t been able to override that feeling yet.

What is the last thing you read about you on the internet?

That happens every day, because people tag you in things online now and you get to see all the stuff. Luckily everyone is really nice to me so I probably read something nice, but I can’t remember specifically what it was. I get a lot of nice words from fans saying that I inspired them to get into painting or photography or something and that is really nice to hear. That is kind of a generational thing because in my generation we didn’t have the access to people through social media. So, it is still kind of strange for me to get messages from kids, but it is also like a really interesting way to see or feel what you have done in the world I think in the past you would not normally know how your impact was. Now with social media you get at least a little taste of what your impact might have been and that is crazy to see.

Can you answer to all the messages you get?

No, I would have to dedicate a couple of hours a day which seems kind of crazy. I do answer if it is a sincere question, if it is someone who is commenting just as a hater I’ll just block him or I don’t care but that doesn’t happen a lot. So yes, I answer questions if someone is asking about a lens or a film or has a real legitim beef with something I did, and I like to debate people on social media. I do because like you pick and choose your battle. I post something political and then I get a bunch of trump supporter coming on my site trying to defend him and I get into like all day discussions with random people that I don’t care about, and it is definitely a waste of time. But it is kind of entertaining for other people to read. I realize that I am not gonna change the persons mind, but I think the exercise is interesting for other people to read the comments. So, it is never about trying to win a debate with a person because that would be trying to convince people not to believe in god which is not that easy. There is no one argument you could make and they’re gonna go oh yeah you are right. They are imbedded in their ideas

When was the last time you were worried about skateboarding and why?

The other night in Berlin before Leo Romero left the tour we had dinner together and we talked about skateboarding. I don’t know if worry is the sort of word, but we were just discussing about what is happening in skateboarding and how business is working. For us we were discussing, how there are certain brands and people that are seemed to be geared towards hipsters who don’t necessarily skate and they are just about style and obscure products and that was frustrating for us because we are a company that is interested in sponsoring really good skaters who are going out and trying hard and like bleeding for it and showing really good skating like your limits and that kind of stuff. And then you have companies who have guys that are just ollieing over a trash can down the streets kinda chillin and those are like the really popular companies and in some aspects of it makes frustrated because we are working hard to sell boards and for some people it seems like they are not working at all to me and they are doing just as well. But like I just said we are not really worried it is just something we discussed and talked about just because it is part of our life. But it is still skateboarding so we support it either way you know. We are not anti those companies, those are brothers you know, it is just fun to talk about it.

I’ve been using this a lot lately, but it sorts of become my automatic response to that question. Think fast, skate faster and don’t look back!

This interview has everything from skateboard politics to hookers and cocain. That’s what happens when you download a questionaire from tumblr.

The young-gun Jeremy Leabres and the OG´s are here to show you the whole range of Toy Machine Skateboarding.

And again. The second Toy Machine video in the last five days. And both have it really in itself.

We talked to Oski and filmer Jonathan Lomar about the documentary and the Olympics and got some behind the scenes footage.

Because Lea Schairer was so unlucky with injuries, this is our longest planned and fastest produced interview at the same time.

Stafhon Boca, Coles Bailey & Zach Baker﻿ went out in LA to film a clip for the new Zahba.