How to get rid of resellers

Long queues in front of Supreme, exclusive collaborations with well-known brands outside of skateboarding and even camping sneaker fans in front of skateshops - we have become accustomed to all this. Shortage fuels demand aka hype and that's exactly what is wanted. What also is wanted are the products - but since they are rare, it is usually difficult. Many who absolutely want to have the stuff, therefore use bots, to order within milliseconds and be faster than the rest. But also resellers, who simply want to make money with the product instead of wearing it themselves, use it, skim off the products and drive up the prices. For the drop of the new Nike SB x Parra shoe Martin Schreiber from Bonkers in Frankfurt came up with its very own strategy to prevent this from happening. 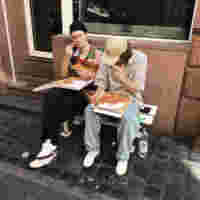 What are you doing right now Martin?

There we're right at the subject. That didn't really exist in the past, did it? These drops, camping in front of the shop and that you had to ship boxes all over the world. When did this hype come up?

Well it happened before with Nike SB. Maybe not that much in Germany but definitely in the US. And since two years things are going buckwild over here as well. It’s only new here because Germany is always a few years late. But the thing is, the brands limit the product to create the hype. So most of the people are not able to get the shoes and have to pay insane prices just because some pissheads bought them and sell them afterwards online for tripple the price.

Is that only a phenomenon that happens with Nike shoes or do other brands have to deal with it as well?

In skateboarding I’d say at the moment it’s just Nike. Cause they’re coming out with some fun stuff once in a while, not matter if it seems strange first. Others don’t really do that.

"There's a real business with shops that don't have a single account from any brand, but still sell all the stuff at horrendous prices."

Do skateboarders camp in front of your shop when those drops happen or is it more sneaker heads that don’t skate?

More like the latter, but some of them also start skating. We now have a bit more contact with these guys, and there are some who said: "I'm going to buy a skateboard now". I know, how long they keep doing it is another story.

In the end there’s nothing wrong with non-skaters buying stuff in skateshops. That’s how money gets into the scene.

Exactly. A skateshops doesn’t live from what skaters buy anyway. They rather invest their money in weed, true story. And the margins on hardware are shit. After taxes and a free griptape I might earn eight Euros from a board. Skateshops always depended on the people that bought the lifestyle in there. I mean how many skaters are there in Germany and how many skateshops? And how many people do you see on the streets that you can tell that they’re not skating but they’re wearing some skatestuff?

Back to the drops that were problematic – especially with bots. Which problems did they cause?

So there's this shoe that's limited to a certain quantity and then some people just play unfairly and use bots and above all there's some people who say "I want ten just to sell them afterwards for three times the price". There's a real business with shops that don't have a single account from any brand, but still sell all the stuff at horrendous prices. And with us it was just that thing... We somehow had 700.000 clicks per minute on our website. Which server should deal with it?

Yip! It's like all of Frankfurt is on the laptop and constantly refreshes the page.

"So we decided to also show the middle finger and sell digital pictures of the shoes."

So your problem was: There was this drop, people aimed bots on your website and that’s why your server crashed?

That's it. Or we had 50 pairs online, but because so much was ordered at the same time, 100 pairs were sold. When 50.000 bots order a shoe at the same time, the system loses track of the stock. Then you have to transfer back the money and people are pissed off. And actually you can't help it. Then at some point we started saying that we no longer put the shoes online and just sold our quantity in the shop. We bought an old mobile phone and said, from 6pm o'clock you can call and who comes through can buy a pair. That went down really well and you also had people whose size was no longer available and who said: "Then give the shoe to somebody else" instead of just buying the wrong size to sell it. The problem was, even if we didn't have the shoe online, the bots still came, the server was down for three days and we couldn't use our website. Then we decided to do something and thought about how those bots work. They get a command to buy product XY and only stop when they have fulfilled the target or get switched off. Then we came across these Facebook ads from some dubious dudes selling digital e-books and stuff. You get a product automatically and you don't have the right to return it, because how do you want to return an email? You can pretend that you're deleting it, but you can have already duplicated the product on your computer. So we decided to also show the middle finger and sell digital pictures of the shoes. We put the shoes online 3.000 times in every shoe size with the title: "Picture of shoe XY" and wrote in the product description that it's not about the shoe, but about seven product pictures of the shoe at 10 Euro each. But of course a bot does not recognize this. It simply searches for the product name and then thinks: "Buy, buy, buy!". The awesome thing is, you have to check off at the check out that you are aware that you are buying a digital product and have no right of return. As soon as they paid, the photos came to them via email, the bots switched off and we said: "Thank you!" and took a very high amount of money…

It went down for a little bit but all together it was fine.

And after everything was over? Where there complaints?

Of course, they all complained at PayPal: "Hey, the product doesn't match the description!" And of course PayPal looks at it and says: "Well, actually it does!" It was quite clear: It says it’s pictures of the shoe and not the shoe. And the price was different, the shoe costs 150 Euros. So PayPal confirmed that we are completely right. Of course there were quite a few PayPal cases at some point and that went so far that PayPal, when I reacted to the complaint, replied: "Mr. Schreiber, stop writing to us. We already know everything. Your money will be there in two days." Of course a few people cried and wrote: "Ok, I used a bot. That was maybe stupid. Could I get my money back?" Then we gave those who asked friendly a 70 Euro voucher. Others, of course, were more into calling us sons of bitches directly... There's also an alleged Chinese who wrote us that he was a fifteen-year-old boy and used his dad's PayPal and he'd knock him out if he found out. So we had a look at the e-mail and the address was resell@... So we were like: "Nope, sorry." Then he started to send a photo of a forearm with a bruise, as if his father had beaten him up. We were just like: So if I had a son and I want to beat him up, where would I hit him first? Sure, the forearm! The forearm is always the best place to beat your son. It is very sensitive and nobody notices it.

How many pics did he buy?

I told them beforehand that I will do this. We also announced it on our blog, on Instagram and Facebook that there will only be pictures of the shoe online. We didn't fool anyone. Anyone could have informed themselves. I went to a Nike meeting in Amsterdam and they loved it. It's also awesome that so many people from the sneaker community came to me and said: "Fuck yeah, there are Supreme and Nike who are regularly killed by bots and can't do anything about it and then there's a little shop from Frankfurt that takes all the bots apart." In any case, this has earned us a very good reputation with them. Of course, the skaters don’t care about it so much, but it's definitely cool for us. We can make new shop clothes from the money or push events here in Frankfurt more. Maybe we can give our team riders a little more. According to the motto: Thank you guys! The money goes straight into the skate scene. We can do more for our boys with it and as a nice side effect fuck up some assholes.

"Look, we are on your side and want you to get the product and not to have to pay three times the price for it."

You made more money with the pics than with the actual shoes, right?

Correct. You only get a certain amount of shoes but you can sell the pics as long as somebody is buying them.

Will you do it again or do you think you got rid of the bots?

We'll definitely do this more often, but I think they'll keep coming anyway. Of course one or the other will learn but I think it will continue and for me it is awesome because I make money with it from those wankers who accept that my website is down for days, who accept that people who really want the shoe do not get it while they just want to sell it to make some easy money. Then I say: "It's okay. I'll also make some easy money here." My mom used to say, "If someone pisses on you, you'll piss back three times until he drowns." She didn't say that exactly, but in a way.

Of course it would be cool. I mean, at the end of the day you make money with it, but I'm also interested in making this whole process as fair as possible. I think it would be cool for many shops if they did that. Sure, that could upset a few guys here and there, but they would take a certain stance and say: "Look, we are on your side and want you to get the product and not to have to pay three times the price for it." So I can only recommend it. Then maybe all the bot-fucktards will learn that they have to find other ways. I mean, of course it will always be the case that they will find something new and we will invent something new then. I want to do that fairly. I can’t stand those resell-dumbasses at all. Sure, if someone is camping in front of the store, I also can't control whether the guy really wears the shoes at the end. But at least he took the effort and slept in front of the store. 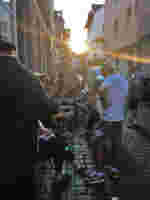 With his Backside Flip at the Hauptwache Doubleset Jean Wefeld has completely torn off this year's Jam of Mainhattan.

Berlin's endless talents and spots – well presented in nearly 14 minutes that felt like a full-length.